The purpose of footnotes is to acknowledge the authority for a statement and provide enough information to enable a reader to find the original source. All sources of information, whether quoted directly or paraphrased, are cited in footnotes. Footnotes are provided in text with corresponding references at the bottom of each page of your assignment.

Footnotes should be placed at the end of the cited material after punctuation, except em dashes (AGLC4 rule 1.1.2)

Use a semicolon to separate multiple sources cited in a single footnote (AGLC4 rule 1.1.3)

Finish every footnote with a full stop (AGLC4 rule 1.1.4)

To add footnotes to your Word document: 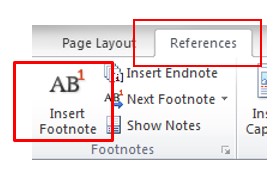 A pinpoint is a reference to a specific page, paragraph or other section of a resource. Pinpoints are placed at the end of the reference.

A pinpoint to a page appears as a number

A pinpoint to a paragraph appears in square brackets

The name of the author should appear exactly as it does on the title page of the source (AGLC4 rule 4.1.1).

eg JA Smith and BE Jones

Sources with an editor rather than an author (AGLC4 rule 4.1.3)

All case names, statute titles, treaty titles, journal titles and other titles as specified should be be italicised in the text, quotations, footnotes and bibliography unless otherwise stated (AGLC4 rule 1.8.2).

Titles of secondary sources should appear as they do in the original source except:

If a source immediately following a footnote is the same then you can use 'Ibid'. Where the pinpoint differs, provide the new pinpoint:

If a source has been referred to in an earlier footnote you can use a shortened form of the reference with a cross reference to the footnote where it can be found:

For cases and legislation a short title or popular name can be used following AGLC4 Rule 1.4.4 (AGLC4 rule 1.4.1):

Examples of using ibid and (n)

Use a short title in subsequent references to a source in text or footnotes, unless the footnote is the same as that immediately preceding it (use Ibid instead). Introduce the short title in inverted commas and parentheses (AGLC4 rule 1.4.4).

In text provide the short title after the full title of the source (AGLC4 rule 1.4.4)

This was cited in the decisione Pape v Federal Commissioner of Taxation ('Pape').1

In footnotes provide the short title after pinpoints or parenthetical clauses (AGLC4 rule 1.5.7)

Other instances where you would include a short title:

NOTE: Only italicise titles if they should be italicised according to Rule 1.8.2.

Omit full stops that do not follow these rules in a quotation or elements of a citation.

An em-dash (—) can be used to indicate an interruption within a sentence, in place of a colon, or on both sides of a parenthetical remark or apposition.

An en-dash (–) may be used to indicate a span between numbers or indicate a tension or disjunction between two concepts.

Use a forward slash (/) to separate alternatives.

Use a hyphen (-) to connect parts of a compound word. Only hyphenate a word if it appears as such in the Macquarie Dictionary (AGLC4, rule 1.9.1).

Use square brackets to indicate an adjustment to a quotation or enclose comments that did not appear in the original text, but aid comprehension

eg As Kirby J notes, '[t]he Minister did not appoint [Justice Mathews] as a reporter until her consent was first signified'.

Short quotations (AGLC4 rule 1.5.1) of three lines or less may be incorporated into the text in inverted commas:

It was held that in respect of vending machines, 'the offer is made when the proprietor of the machine holds it out as being ready to receive money'.1

Long quotations (AGLC4 rule 1.5.1) of four lines or more should be:

The Judge stated that

While malicious conduct may entitle the successful party to an award of exemplary damages, the absence of malice does not necessarily disentitle an award of that nature. Depending on the circumstances, the type of conduct necessary to justify an award of exemplary damages may be founded on contumelious behaviour which falls short of being malicious or which is not aptly described in those terms. The plaintiff submits that exemplary damages may also be awarded 'as a means of ensuring that those responsible for overseeing the Police force ensure that officers are trained so that abuses do not happen again', relying on Cunningham v Traynor.13

Words should be capitalised where:

In titles and headings capitalise the:

Other notes on capitalisation:

See rule 1.7 for a full list of all words that should be capitalised.

Only use headings that are relevant to the sources you have used. If you do not include a source type, change the lettering to be in correct ascending order eg:

TIP: 'Other' can include:

Convention on the Elimination of all Forms of Discrimination against Women, opened for signature 18 December 1979, [1983] ATS 9 (entered into force 18 September 1981)

Convention on the Safety of United Nations and Associated Personnel, opened for signature 22 December 1994, [2001] ATS 3 (entered into force 15 January 1999)

Community Law Australia, Unaffordable and Out of Reach: The Problem of Access to the Australian Legal System (Report, July 2012)

Mobil Oil Australia, Submission No 25 to Australian Competition and Consumer Commission, Inquiry into the Price of Unleaded Petrol (27 July 2007)

What if my source isn't covered by AGLC4?

This guide is not exhaustive. Consult the full AGLC4 manual for full information.

When a source is not included in this guide or the AGLC4, adapt the reference from a similar source.

When adapting a reference the AGLC4 recommends being: